One Christmas He Never Expected by Lynne Marshall

Phil Hansen has a reputation as a playboy. One look at the new OB doc, and he wants to find the nearest mistletoe. What could be better than kicking off the holiday season with a fling? Except he sees heartbreak in her eyes.Stephanie Bennett may be dazzled by laid-back Phil’s charm, and though she is long overdue for romance, she’s not ready to put her heart on the line again. Soon swayed by his “love is the best medicine” attitude, she gives in and comes alive in his arms.Can the magic of the Christmas season help two reluctant hearts fall in love?

An adult man who sleeps with his little four year old half-brother because he's afraid; a successful doctor who dresses as a Surfer Dude Santa, complete with a belly pad beneath a reindeer-patterned Hawaiian shirt and red velvet pants with suspenders. Maybe, just maybe, Phil Hanson is more than the playboy doctor that so many believe him to be. And maybe, just maybe, he will want to change his playboy status after working with the new gynecologist who has joined the clinic where he works.

Dr. Hanson is very handsome and charming but he soon discovers that Dr. Stephanie Bennett isn't as easily swayed as most of his female acquaintances. As he contemplates more than a casual flirtation, he realizes that Stephanie has some issues that may prevent this from happening.

One Christmas He Never Expected is the third book in Lynne Marshall's Santa Barbara Sunsets Trilogy and readers can once again experience romance as only she can write. I enjoyed that some of the characters from the other two books are mentioned and I admire Marshall's ability to show honest emotions and realistic situations. I also appreciate that even though there are references to pre-marital sex, they are tastefully done and not offensive. This is a wonderful way to wrap up a series and people who yearn for "happily ever after" will want to read this book!

I received a copy of this book from the author but was under no obligation to post a positive review. These are my own thoughts. 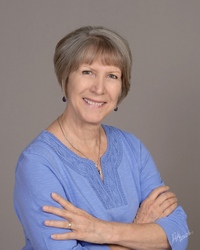 USA Today Bestselling author, Lynne Marshall, used to worry she had a serious problem with daydreaming. Then she discovered she was supposed to write the stories in her head. A late bloomer, Lynne came to fiction writing after her children were nearly grown. Now she battles the empty nest by writing stories which always include a romance, sometimes medicine, a dose of mirth, or both, but always stories from her heart. She is a Southern California native, married to a New Englander for a long, long time, has two adult children she loves dearly, and three amazing grandchildren she adores. She is also a dog lover, a cat admirer, a meandering walker, and an optimistic traveler on this wild journey called life!

View all my reviews
Posted by Connie Porter Saunders at 8:00 AM