A Life Once Dreamed by Rachel Fordham 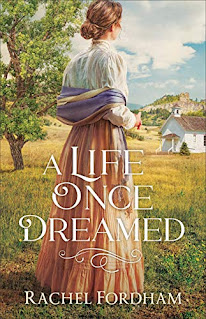 ABOUT THE BOOK
Six years ago, a shocking secret sent Agnes Pratt running in search of a new start. She found it in Penance, a rugged town of miners and lumberjacks in the Dakota Territory, where she became Miss Aggie, respected schoolteacher and confirmed old maid. But the past has a way of catching up with people.

When childhood friend and former sweetheart James Harris accepts a position as the town doctor, Aggie's pleasantly predictable days suddenly become anything but. James wants to know why Agnes left behind the life they had dreamed of creating for themselves--but he is the one person who can never know.

In the shadows of the Black Hills, can a healing light be shed on the past? Or will the secret Agnes can't seem to outrun destroy her chance at happiness?

MY THOUGHTS.....
"Ruby, it doesn't matter so much where you live as how you live. And even though I miss some things, I am a teacher and I'm needed here."

This is such a lovely book and it definitely convinced me that Rachel Fordham is an author that I need to follow. A Life Once Dreamed is set in 1880 in the Dakota Territory and Fordham paints a vivid picture of the small mining town of Penance, with its one room schoolhouse and saloon, and the rugged men and strong women who live there. Agnes "Aggie" Pratt is a teacher who truly loves her students and she has made a huge difference in their lives but she's resigned herself to always being their "spinster school teacher". It is when the new doctor arrives that Aggie realizes that her future may be forever altered. James Harris is a man from her past who stirs up feelings that she had tried to bury and Aggie finds herself wondering "What if?" as her neat, tidy life is turned upside down!

I loved learning about the Aggie and James as they once were and I enjoyed seeing how they had changed over the six years they were apart. There are some other characters who add so much dimension to the story: the irrepressible student Tommy Smith, who can't understand why Aggie is an old maid, Hannah and her daughter Ruby, and of course, baby Freddie. Not to mention Sam, who grabbed my heart and left me wanting another story just for him!

A Life Once Dreamed is a tale of sacrificial love, second chances, and a sweet romance that all of us would like to experience. There is also the mystery behind Aggie's decision to leave her affluent life in Buffalo and an inspiring faith message that is woven throughout the story. If you enjoy historical fiction and Christian romance, you will want to read this book!

This book was provided courtesy of Baker Publishing Group/Revell through Interviews & Reviews for my honest opinion.

Rachel Fordham started writing when her children began begging her for stories at night. She’d pull a book from the shelf, but they’d insist she make one up. Finally she put her love of good stories with her love of writing and she hasn’t stopped since. She lives with her husband and children on an island in the state of Washington.

View all my reviews
Posted by Connie Porter Saunders at 2:26 PM