Almost a Bride (The Bride Ships #4) by Jody Hedlund 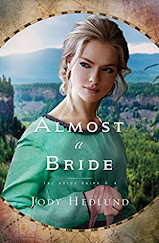 Always close, but never a bride.

Longing to find true love, Kate Millington arrives in British Columbia on a bride ship. With countless men waiting to snag a bride, Kate has no trouble getting engaged. It’s staying engaged that’s the problem. After traveling to the remote mining town of Williamsville to marry her newest fiancé, she finds herself single again.

As the prosperous owner of a gold mine, Zeke Hart has everything he’s ever wanted except for a wife. At Kate’s arrival, he takes it upon himself to protect his childhood friend from the men clamoring to court her. The more he renews her friendship, the more he wants to win her for himself. But as much as Kate admires Zeke, she’s resolved not to marry someone who doesn’t share her faith.

When Zeke begins receiving anonymous threats, he unwittingly puts them both in grave danger. In the midst of peril, the past rises up to haunt them both, and Zeke realizes the fight for Kate’s affection may be his biggest challenge yet.

'She could do this. After all, this was why she'd left Manchester last fall and sailed halfway across the world on the Robert Lowe bride ship. She'd come to find a husband and get married!'

In the conclusion to the Bride Ships series, Jody Hedlund offers another intriguing story that includes a beautiful young woman who can't commit because of scars left by her father's desertion, a man who has lived recklessly and often immorally in his search to change his life of poverty, and hundreds of men desperately seeking a wife. All of these situations play a major part in Almost a Bride and you can rest assured that a lot of drama is about to take place in British Columbia! 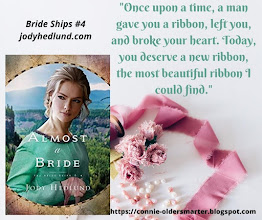 Kate Millington is saved from an angry rejected fiance and she realizes that her savior is actually a neighbor that she knew as a child in Manchester, England. Soon, Kate finds herself experiencing intense feelings for Zeke Hart but there is a major hurdle in their relationship: Zeke isn't a Christian and Kate can't commit to a man who doesn't share her beliefs. Can Kate overcome her fear of marriage? Will Zeke discover the joy and peace that comes from a life of faith? Is it possible that their intense romantic chemistry will develop into a lasting love? 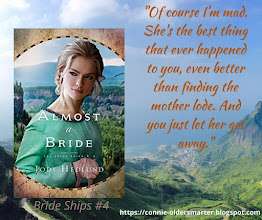 I liked that author Jody Hedlund has created some very realistic characters for Almost a Bride. Both Kate and Zeke have faults but she shows their personal growth as the story continues and I also loved Becca and Mr. Peabody, two secondary characters who offer Kate and Zeke support and sage advice. Readers are also given a chance to catch up with Zoe, Abe, and the orphanage featured in the previous book.

The Bride Ships series has been an entertaining series with amazing characters and I often found myself wondering if I would have been brave enough and strong enough to leave my home, travel by ship for months at a time, and agree to marry a man I had never met. If you enjoy historical romance with adventure, mystery, and a message of faith, you will certainly want to read Almost a Bride.

I received a copy of this book from the author but I wasn't obligated to write a favorable review. These are my own thoughts. 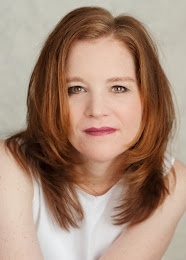 Jody Hedlund is the best-selling author of over twenty historicals for both adults and teens and is the winner of numerous awards including the Christy, Carol, and Christian Book Award. She lives in central Michigan with her husband, five busy teens, and five spoiled cats. 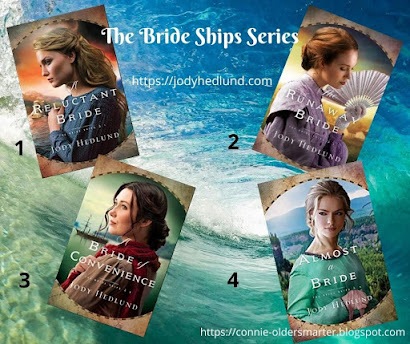 View all my reviews
Posted by Connie Porter Saunders at 5:06 PM