Glimpses of God: a summer devotional for women by Shirley Crowder: Review & Giveaway with Celebrate Lit 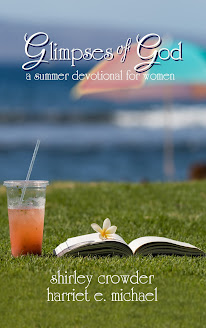 Creator God made the world in which we live. He placed the moon and stars in the sky, the rivers and ocean on the earth. He also created seasons throughout the year. Each season is defined by specific features/attributes that are common although the degree varies depending on where a person lives. In winter we think of cold weather; in spring, blooming flowers; in summer, warm weather; and in the fall, beautifully colored leaves.

As Christ-followers we also experience spiritual seasons. These seasons do not come in order like seasons in nature, which come regularly without fail. Each spiritual season we experience is defined by certain features also. In spiritual winter we think of the coldness of our relationship with God; in spring, new

This devotional is focused on summer—both calendar and spiritual. Our spiritual summer is a time of growth, hard work, and relaxation as we nurture and care for the new things that were planted in our spiritual spring and allow them to ripen or mature.

During His Creation, God determined that there would be four seasons to enjoy. The Summer season can be a time of hard work but it can also be time for fun and relaxation and the authors of Glimpses of God focus on both of these. As I read the sixty-five devotions divided into thirteen chapters, I discovered that many of my Summer memories are similar to those of Shirley Crowder and Harriet E. Michael. Blackberry Winter, Dog Days of Summer, and Vacation Bible School are all familiar topics and there are also devotions for the special days of summer, including Memorial Day, the Fourth of July,.and returning to school the day after Labor Day. Each devotion is written in a conversational style that adds to its relatability and I especially like that they each have Bible Scripture, a suggested Prayer, and a Thought for the Day.

Glimpses of God: A Summer Devotional for Women is an inspiring book, filled with life lessons and spiritual nuggets, and I recommend it for both personal devotions and group discussion.

I received a copy of this book from Celebrate Lit but I wasn't obligated to write a favorable review. All opinions are strictly mine.
My rating: 4 of 5 stars 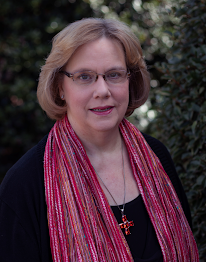 Shirley Crowder was born in a remission guest house under the shade of a mango tree in Nigeria, West Africa, where her parents served as missionaries. She and co-author Harriet E. Michael grew up together on the mission field and have been life-long friends.
Shirley is passionate about disciple-making, which is manifested in and through a myriad of ministry opportunities: biblical counseling, teaching Bible studies, writing, and music.
She is a biblical counselor and is commissioned by and serves on the national Advisory Team for The Addiction Connection. She is an award-winning writer who has had several of her articles appear in “Paper Pulpit” in the Faith section of The Gadsden Times, and in a David C. Cook publication. She also writes articles for Life Bible Study, Woman’s Missionary Union, The Addiction Connection and Inspired Prompt. She has authored, co-authored, or contributed to eight books.

Shirley has spiritual children, grandchildren, and even great-grandchildren serving the Lord in various ministry and secular positions throughout the world. 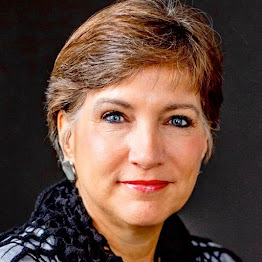 Harriet E. Michael was born in Joinkrama, Nigeria, deep in the African jungle in the Niger River delta, where her father served as the only missionary doctor at that station. A few years later, the mission moved the family to a larger hospital in Ogbomoso. Co-author Shirley Crowder and her family lived right across the dirt road. The two children became constant playmates. Today they continue to enjoy their lifelong friendship.

Harriet is a multi-published, award-winning writer and speaker. She has authored or co-authored seven books (six nonfiction and one novel) with several more under contract for future release. She is also a prolific freelance writer, having penned over 200 articles, devotions, and stories. Her work has appeared in publications by Focus on the Family, David C. Cook, Lifeway, Standard Publishing, Chicken Soup for the Soul, The Upper Room, Judson Press, Bethany House, and more. When not writing, she loves speaking to women’s groups and teaching workshops on freelance writing.

She and her husband of more than 40 years have four children and two grandchildren. When not writing, she enjoys substituting at a Christian school near her home, gardening, cooking, and traveling.

In the same way that nature’s seasons serve a purpose on earth, so do the seasons in our spiritual lives. God provides, cares for, and sustains the earth, and in His faithfulness, He does the same for us. Our responsibility is to be obedient to God’s commands in the Bible and to cling to the truth that God is in control.
Our “Glimpses of God” series consist of:
We pray that as readers meditate upon the Bible passages and truths in each devotional, they will catch glimpses of God in and through everything around them.
How has He provided for you? How is He protecting you? How is He teaching you?

Spoken from the Heart, August 11

Because I said so — and other adventures in Parenting, August 16

For Him and My Family, August 22 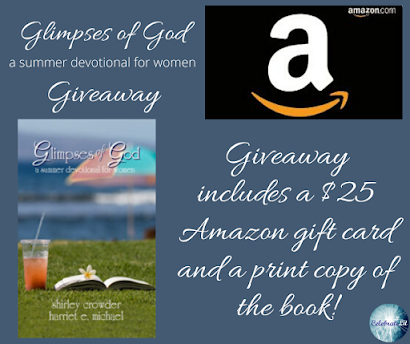 To celebrate their tour, Shirley and Harriet are giving away the grand prize package of a print copy of Glimpses of God: A Summer Devotional for Women and a $25 Amazon gift card!!
Be sure to comment on the blog stops for nine extra entries into the giveaway! Click the link below to enter.
https://promosimple.com/ps/fee5/glimpses-of-god-a-summer-devotional-for-women-celebration-tour-giveaway
View all my reviews
Posted by Connie Porter Saunders at 12:00 AM