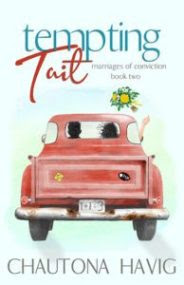 He chose to be a dad before he realized he’d need a wife, too.

When Tait took in an abandoned girl, he had no idea it would change his life.

Tait Stedtmann–accountant, fledgling do-it-yourselfer, and all-around nice guy. He’d been more than a little interested in Bentley Girard and had finally worked up the courage to ask her out. That was before that fateful day at the rest stop when he saw a girl shoved from a car and abandoned there.

She’s not like any girl he’s ever met, and now she’s given him an ultimatum.  Adopt her baby, or she’ll abort it.

Eden doesn’t think he’ll do it. She can have the abortion and move on with her life–far away from these creepy Christians in Fairbury.  But when Tait agrees, she finds herself keeping her word… and the pregnancy.

Nine months later, Tait is wracked by guilt as relief sets in when Eden leaves and terrified as he decides he can’t do this daddy thing alone. Bentley figured out how to make marriage happen for her.

Would she help him, find someone, too?

Tempting Tait is the second in the Marriages of Conviction series.

Tait Stedtmann doesn't seem to be a hero or a lady-killer by his physical appearance but he is definitely both! Tait is a Christian who has strong beliefs about abortion and about the sanctity of marriage and he's someone we would all want our daughters to marry. How many men would be willing to save a baby from being aborted by agreeing to adopt that baby even though he doesn't have marriage, or even a girlfriend, on his radar? How many Christians would actually risk their reputation to do the right thing?

Tait experiences many humorous moments with Eden and her baby, Haven, and his surprising 'marriage of conviction' and its consequences had me laughing out loud. The strength of Tempting Tait, however, is its subtle, but powerful, faith message. Author Chautona Havig has written a heartwarming, thought-provoking book and I recommend it to all who enjoy contemporary Christian romance.

I received a copy of this book from the author via Celebrate Lit. A positive review wasn't required and these are my own thoughts. 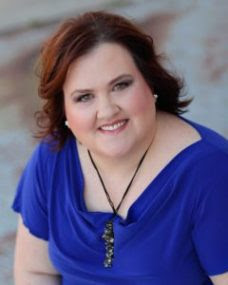 Chautona Havig lives in an oxymoron, escapes into imaginary worlds that look startlingly similar to ours and writes the stories that emerge. An irrepressible optimist, Chautona sees everything through a kaleidoscope of It’s a Wonderful Life sprinkled with fairy tales. Find her at chautona.com and say howdy—if you can remember how to spell her name.

How One Man Turns A Mess into a Miracle

It’s been ten… maybe fifteen years since Eden Pohl waltzed into my brain and settled in. Despite my focused attention on other books, her taunts never strayed far from my hearing.

If you really believed what you say about abortion, you’d tell my story.

You just don’t want to have to write the messy stuff.

Ouch. Worst of all, she was wrong.  And she wasn’t.

I don’t mind attacking the hard things when it’s the right time, but I only had half a story. I knew what would not happen but not what would.

So, she languished there in what is probably the longest pregnancy in fiction.

After my friend, Sandy, killed my dreams of combining Tait and Bentley’s stories and added Tait’s (and therefore Eden’s) into a series, things clicked.  Duh. Tait would need a wife. Being a single parent is hard. It isn’t how God designed things, you know? We’re supposed to have help.  A spouse, extended family, the church.

But sometimes things don’t work in this fallen world.  Sometimes we find ourselves parents—even by choice—without the daily support of another parent. Not only that, sometimes our own parents aren’t in a position to be able to help. Age, illness, or distance can remove us from the God-given networks we should have and don’t.

Finally, our decisions sometimes cause us to isolate ourselves even from God’s family, and the result can mean we don’t have that help that we otherwise would.

One verse came to mind over and over when I planned out the rest of Tait’s story.

Then the LORD God said, “It is not good for the man to be alone; I will make him a helper suitable for him.” (Genesis 2:18)

Sometimes the words tried to transform themselves into, “It is not good for a father to be alone, so God will find him a helper parent suitable…”

And I had to silence that voice.

First, because we don’t just change Scripture to suit our purpose. Or rather, we shouldn’t.

Second, because that’s even more out of order than having a baby before marriage.  It happens sometimes—sometimes by choice, as in Tait’s situation. However, the healthiest marriage will usually put a strong emphasis on the marriage relationship first (after the Lord, of course) and then focus on the children.  Why? Because it is best for the children if their parents are in unity. Children find security and strength in knowing their parents love and are committed to each other.

So many times, I started to put that emphasis in the wrong place struggled to get it right. Then one day I realized that this was the very thing I needed to do.  Show that struggle.  I needed to show that Tait’s focus was wrong—that he created problems he could have avoided simply by being a good daddy… but also by being an even better husband.

I hope you’ll enjoy Tait’s story, and I pray that his heart for the unborn will touch your life in a real and tangible way. 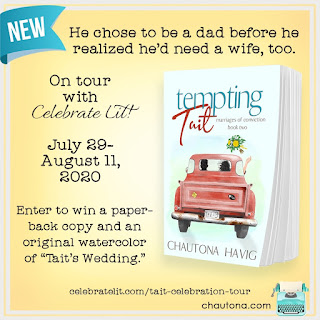 To celebrate her tour, Chautona is giving away the grand prize package of a paperback copy of Tempting Tait and an original watercolor of “Tait’s Wedding”!!
Be sure to comment on the blog stops for nine extra entries into the giveaway! Click the link below to enter.