After her rescue of nearly fifty kidnapped children made international headlines, Amara Alvarez gets what she’s worked for: a transfer to San Antonio’s Homicide Division. But reality sets in quickly when her first case, the suspicious death of a teenager at a crowded local water park, plunges her life into chaos.

As the investigation moves forward, Amara finds herself stalked online by cybercriminals who uncover her personal life in frightening detail. With few leads, she’s forced to resort to unconventional methods to find the killer and prevent her first murder investigation from ending up in the cold case files.

Tom Threadgill is back with another riveting page-turner featuring the detective who is willing to put everything on the line to see justice served and lives protected.

MY THOUGHTS.....
Looking for an action-filled, high-paced novel with a strong female as the main character? Network of Deceit starts out with a bang and it never lets up as we once again see Detective Amara Alvarez at work! Amara is now a detective with the San Antonio Homicide Division and her investigation of a teenager's death turns into a look at cybercrime and its toll on society. Author Tom Threadgill shares another glimpse of this multi-faceted detective with the ability to see beyond the obvious and think outside the box! And then there's Detective Jeremiah "Starsky" Peckham! Will these two detectives discover that there's more to their relationship than a working partnership?

Network of Deceit is a clean read, with lots of twists and turns and an "I didn't see that coming" ending. I'm looking forward to more adventures with this intriguing female protagonist!

I received a copy of this book from Revell. There was no obligation for a positive review. These are my own thoughts. 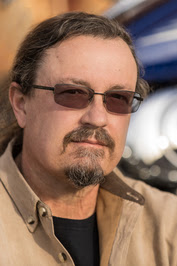 ABOUT THE AUTHOR
Tom Threadgill's books have a distinct focus on clean, suspenseful action with strong character development. He is a member of the International Thriller Writers (ITW) and American Christian Fiction Writers (ACFW). In his downtime, Tom enjoys woodworking, riding his Harley, and chasing the elusive Yard of the Month award. He currently resides with his wife in the Dallas area and can be reached through his Website. You can also follow him on  Facebook     Twitter
View all my reviews
Posted by Connie Porter Saunders at 4:50 PM