When Twilight Breaks by Sarah Sundin

Munich, 1938. Evelyn Brand is an American foreign correspondent as determined to prove her worth in a male-dominated profession as she is to expose the growing tyranny in Nazi Germany. To do so, she must walk a thin line. If she offends the government, she could be expelled from the country--or worse. If she fails to truthfully report on major stories, she'll never be able to give a voice to the oppressed--and wake up the folks back home.In another part of the city, American graduate student Peter Lang is working on his PhD in German. Disillusioned with the chaos in the world due to the Great Depression, he is impressed with the prosperity and order of German society. But when the brutality of the regime hits close, he discovers a far better way to use his contacts within the Nazi party--to feed information to the shrewd reporter he can't get off his mind.This electric standalone novel from fan-favorite Sarah Sundin puts you right at the intersection of pulse-pounding suspense and heart-stopping romance.
MY THOUGHTS.....
l've read several historical fiction books set in Germany during WWII that dealt with the years of the Holocaust but this new book by Sarah Sundin is set in 1938 Germany, during the time leading up to the beginning of the war in 1939. There was a real-life event named Kristallnacht that I didn't know about and Sundin shares powerful scenes based on this event that occurred November 9-10, 1938. Fictional characters Evelyn Brand and Peter Lang find themselves fleeing for their lives as German soldiers burn and destroy homes, businesses, and synagogues. As I read of their desperate attempt to escape, I experienced their terror and confusion. These vivid scenes reminded me of the atrocities that were soon to be suffered by all Jewish people.

Sundin once again demonstrates her ability to place relatable characters into believable storylines that combine both fictional and historical events. Historical fiction fans will find this book appealing, romance lovers will love the budding relationship between Evelyn and Peter, and there is a strong faith message that affirms God's power. I highly recommend When Twilight Breaks!

I received a copy of this book from Revell Publishing. I was under no obligation to write a favorable review. These are my own thoughts. 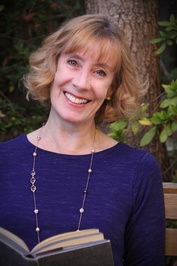 Sarah Sundin enjoys writing about the drama and romance of the World War II era. She is the bestselling author of The Land Beneath Us (February 2020), The Sky Above Us (2019) and The Sea Before Us (2018), as well as the Waves of Freedom, Wings of the Nightingale series, and Wings of Glory series. Her novel The Sea Before Us received the 2019 Reader's Choice Award from Faith, Hope, and Love, Through Waters Deep and When Tides Turn were named to Booklist's "101 Best Romance Novels of the Last 10 Years," and Through Waters Deep won the 2016 INSPY Award and was a Carol Award finalist.A mother of three, Sundin lives in northern California and teaches Sunday school and women's Bible studies. She enjoys speaking to community, church, and writers' groups. Sarah serves as the Program Director for West Coast Christian Writers Conference.

Learn more about Sarah and her books here.