ABOUT THE BOOK
Natchez Trace Ranger and historian Emma Winters hoped never to see Sam Ryker again after she broke off her engagement to him. But when shots are fired at her at a historical landmark just off the Natchez Trace, she's forced to work alongside Sam as the Natchez Trace law enforcement district ranger in the ensuing investigation. To complicate matters, Emma has acquired a delusional secret admirer who is determined to have her as his own. Sam is merely an obstruction, one which must be removed.

Sam knows that he has failed Emma in the past and he doesn't intend to let her down again. Especially since her life is on the line. As the threads of the investigation cross and tangle with their own personal history, Sam and Emma have a chance to discover the truth, not only about the victim but about what went wrong in their relationship.
MY THOUGHTS.....

'It was so hard to believe that she could be the object of some man's obsession.'
Whew! This book kept me invested until the very end and even though I thought I knew the villain, I was never absolutely sure. In fact, I was wrong several times! Natchez Trace Ranger and historian Emma Winters has trouble committing to a long term relationship but there is apparently someone who believes that he can change her feelings. What follows is a nail-biting, pulse-altering story that kept me guessing, with its twists and turns and multiple characters who appeared to be guilty. The only person that I was sure about was Ranger Sam Ryker and I couldn't believe that Emma wasn't falling into her ex-fiance's arms!

This is labeled as romantic suspense, so you can count on some clean romantic chemistry but Obsession is first and foremost a mystery/suspense novel. There is also a strong faith thread that runs throughout the story, with forgiveness as the key element. Emma needs to forgive herself for lashing out at her twin brother shortly before he disappeared and she also needs to forgive Sam for not being completely open about events from the past. Sam himself has an issue with forgiveness and it seems that he will never be able to forgive the physical and emotional abuse that his father subjected him to during his childhood. Will Emma and Sam realize that they can never truly be free from the past if they withhold forgiveness? Isn't forgiveness a requirement for those who profess to love God?

If you're looking for a story with well-developed characters and an absorbing plot that keeps you turning the pages, you will want to read Obsession by Patricia Bradley. It's the second book in the Natchez Trace Park Rangers series and I certainly look forward to the next installment!

I received a copy of this book from the author and publisher. There was no obligation to write a favorable review. These are my own thoughts.
My rating: 5 of 5 stars
ABOUT THE AUTHOR 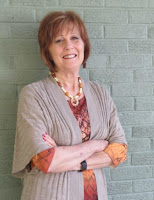 View all my reviews
Posted by Connie Porter Saunders at 5:17 PM