The Invisible Woman by Erika Robuck 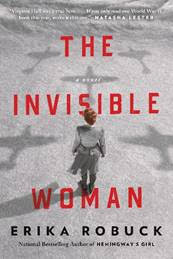 Based on the remarkable true story of an American woman who defied the odds to become the most dangerous Allied spy in France during World War II, comes a gripping historical novel about strength, humanity, and bravery from the bestselling author of Hemingway's Girl.

March 1944. Virginia Hall wasn't like the other young society women back home in Baltimore--she never wanted the debutante ball or silk gloves. Instead, she traded a safe life for adventure in Europe, and when her beloved second home is thrust into the dark days of war, she leaps in headfirst.

Once she's recruited as an Allied spy, subverting the Nazis becomes her calling. But even the most cunning agent can be bested, and in wartime trusting the wrong person can prove fatal. Virginia is haunted every day by the betrayal that ravaged her first operation, and will do everything in her power to avenge the brave people she lost.

While her future is anything but certain, this time more than ever Virginia knows that failure is not an option. Especially when she discovers what--and whom--she's truly protecting.

Imagine seeing your own face staring back at you from a wanted poster as you try to slip past Nazis who are swarming the busy hub of a French train station. Will they see past the gray dye that hides your auburn hair, the wrinkles drawn on your forehead and cheeks, the fake eyeglasses, and the layers of clothing that make you look so much heavier? Will they recognize that you are the 'limping lady' who has become a thorn in their flesh, the dangerous lady spy that they are determined to capture and eliminate?

This scene near the beginning of The Invisible Woman sets the stage for a thrill-packed story that often took my breath away. Author Erika Robuck weaves fictional details with historical facts and the resulting story is one that I won't soon forget. As I read the amazing feats of OSS agent Virginia Hall, I concluded that she could have also been called a wonder woman as she feverishly worked to aid the war effort while wearing a prosthetic leg she had named Cuthbert. Hall was the ultimate spy and freedom fighter, the only civilian woman to ever be given the United States Distinguished Service Cross., and a CIA operative after the end of WWII.

I love a book that entertains as it enlightens and this book certainly delivers. Robuck stirred my emotions as I was plunged into a world of spies, war, and the uncertainties of justice versus revenge. The Invisible Woman is exceptional historical fiction!

I received a copy of this book from the publisher. There was no obligation for a positive review. These are my own thoughts. 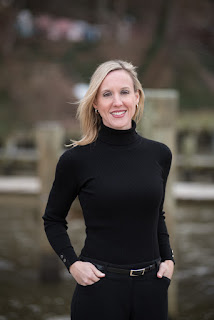 Erika Robuck is the national bestselling author of Receive Me Falling, Hemingway's Girl, Call Me Zelda, Fallen Beauty, and The House of Hawthorne. She is a contributor to the anthology Grand Central: Original Stories of Postwar Love and Reunion and to the Writer's Digest essay collection Author in Progress. Robuck lives in Annapolis, Maryland, with her husband and three sons.

View all my reviews
Posted by Connie Porter Saunders at 12:56 AM