The Prince of Spies (Hope and Glory, #3) by Elizabeth Camden 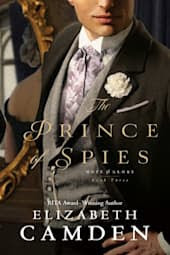 ABOUT THE BOOK
Luke Delacroix has the reputation of a charming man-about-town in Gilded Age Washington, DC. In reality, he is secretly carrying out an ambitious agenda in Congress. His current mission is to thwart the reelection of Congressman Clyde Magruder, his only real enemy in the world.

But trouble begins when Luke meets Marianne Magruder, the congressman's only daughter, whose job as a government photographer gives her unprecedented access to sites throughout the city. Luke is captivated by Marianne's quick wit and alluring charm, leading them both into a dangerous gamble to reconcile their feelings for each other with Luke's driving passion for vital reforms in Congress.

Can their newfound love survive a political firestorm, or will three generations of family rivalry drive them apart forever? 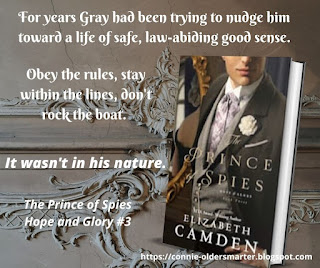 This is the third and final book of the Hope and Glory series and I believe that it's my favorite. I enjoyed Gray and Caroline's previous stories but oh, my, there's just something about Luke Delacroix! Is it because he chooses to live outside the lines? That he cares deeply for correcting the wrongs of the world? Or his deep faith in God that became even stronger while he was locked up in a Cuban jail? Yes, Luke Delacroix is a hero to remember!

The Prince of Spies is set in 1902 and author Elizabeth Camden offers another look at the wealth and prestige that was prevalent in Washington, DC during this time. She also provides a glimpse of that era's political scene, with the wheeling and dealing behind closed doors, and introduces readers to the Poison Squad, a group of young men determined to prove that the artificial chemicals being used in food were detrimental to human health. Best of all, she shares the overwhelming attraction that develops between Luke and Marianne Magruder, the daughter of Clyde Magruder, a longtime adversary of the Delacroix family. Marianne is certainly drawn to Luke but she is also very devoted to her family. Can they overcome the many obstacles or will Luke and Marianne need to sacrifice their happiness?
If you enjoy sweet romance that takes your breath away, suspense that keeps you intrigued until the end, and historical fiction that enlightens as it entertains, you will want to read The Prince of Spies. Elizabeth Camden has once again proven her exceptional writing talent!

I received a copy of this book from the publisher but I wasn't required to give a favorable review. All opinions are my own.

Elizabeth Camden (www.elizabethcamden.com) is best known for her historical novels set in Gilded Age America, featuring clever heroines and richly layered storylines. Before she was a writer, she was an academic librarian at some of the largest and smallest libraries in America, but her favorite is the continually growing library in her own home. Her novels have won the RITA and Christy Award and have appeared on the CBA bestsellers list. She lives in Orlando, Florida, with her husband, who graciously tolerates her intimidating stockpile of books.
Visit her at Facebook     Instagram
Hope and Glory Series 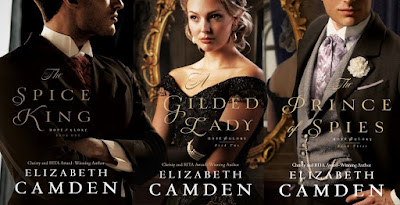 View all my reviews
Posted by Connie Porter Saunders at 8:00 PM