A Heart Adrift by Laura Frantz

ABOUT THE BOOK
It is 1755, and the threat of war with France looms over colonial York, Virginia. Chocolatier Esmee Shaw is fighting her own battle of the heart. Having reached her twenty-eighth birthday, she is reconciled to life alone after a decade-old failed love affair from which she's never quite recovered. But she longs to find something worthwhile to do with her life.Captain Henri Lennox has returned to port after a lengthy absence, intent on completing the lighthouse in the dangerous Chesapeake Bay, a dream he once shared with Esmee. But when the colonial government asks him to lead a secret naval expedition against the French, his future is plunged into uncertainty.Will a war and a cache of regrets keep them apart, or can their shared vision and dedication to the colonial cause heal the wounds of the past? Bestselling and award-winning author Laura Frantz whisks you away to a time fraught with peril--on the sea and in the heart--in this redemptive, romantic story.
Amazon     Barnes & Noble    Christian Book
MY THOUGHTS..... 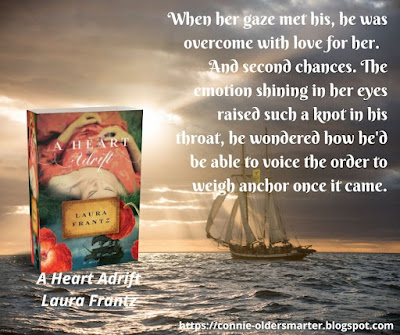 After reading this book, my fascination with chocolate has reached a new level! Author Laura Frantz takes us into the life of a chocolatier in the year 1755 and offers us a fascinating tale that is rich in historical detail and the mention of chocolate. Esmee Shaw operates her family's chocolate shop, and she is a devoted daughter, sister, and friend. She is also a twenty-eight-year woman who still loves the man who left her ten years ago to pursue his love of the sea. Is Captain Henri Lennox a respected privateer, or is he a pirate? Will Esmee ever know the joy that comes from being a wife and mother?

I was mesmerized by A Heart Adrift, and my love of history was fed by this story that includes the American colonies becoming involved in a war with France. I felt like I was living in York, Virginia, and I could almost taste those delicious chocolate delicacies. I could feel how torn Esmee was at the return of the man that she had never forgotten, and I also felt Henri's uncertainty when he returned. Watching them reconnect made my own heart flutter, and I truly wanted a happy ending for them!

This is a story of love lost, hope regained, and a faith that sustains through the worst of times. I highly recommend A Heart Adrift to all who enjoy historical fiction and clean romance.

I received a complimentary copy of this book from Revell. There was no obligation of a favorable review. These are my own thoughts.
My rating: 5 of 5 stars 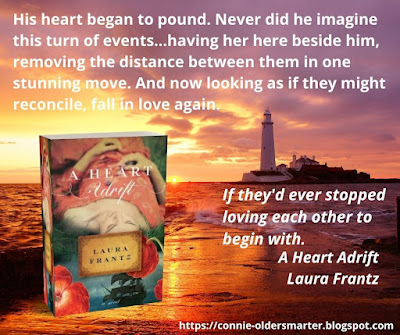 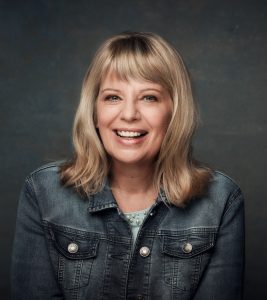 Laura Frantz is a Christy Award winner and the ECPA bestselling author of more than a dozen novels, including An Uncommon Woman, Tidewater Bride, The Frontiersman’s Daughter, Courting Morrow Little, The Colonel’s Lady, The Lacemaker, and A Bound Heart. She is a proud mom of an American soldier and a career firefighter. When not at home in Kentucky, she and her husband live in Washington State. Learn more at www.laurafrantz.net.

View all my reviews
Posted by Connie Porter Saunders at 1:30 PM