ABOUT THE BOOK
Betrayed by her brother and the man she loves…whom can she trust when tragedy strikes?Soldiers are pouring into Washington City every day and have begun drilling in preparation for a battle with the Confederacy. Annie Swanson worries for her brother, whom she’s just discovered is a Confederate officer in his new home state of North Carolina. Even as Annie battles feelings of betrayal toward the big brother she’s always adored, her wealthy banker father swears her and her sister to secrecy about their brother’s actions. How could he forsake their mother’s abolitionist teachings?Sergeant-Major John Finn camps within a mile of the Swansons’ mansion where his West Point pal once lived. Sweet Annie captured his heart at Will’s wedding last year and he looks forward to reestablishing their relationship—until he’s asked to spy on her father.To prove her father’s loyalty to the Union, John agrees to spy on the Swanson family, though Annie must never know. Then the war strikes a blow that threatens to destroy them all—including the love that’s grown between them against all odds.
MY THOUGHTS..... 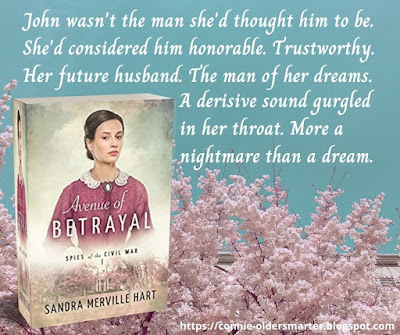 What can I say about Avenue of Betrayal? If you haven't read many books about the Civil War, you're in for a treat, and if you are already a fan...you're about to gain a whole new perspective. Avenue of Betrayal is an exciting book about The War Between the States, and author Sandra Merville Hart eloquently shows the devastation of this war. A war that destroyed the unity of our nation and caused families to be split apart. There are several intriguing characters, but the primary focus is on Annie Swanson and John Finn. Annie is very attracted to this Union Sergeant Major, and she hates that her father has asked her to hide the fact that her brother has changed his loyalty and is now fighting for the Confederacy. Annie is torn by this plea for secrecy, but John isn't exactly truthful either. He has been asked to spy on Annie's father, a suspected supporter of the Confederacy. Secrets, spies, and young love amidst war and destruction. How can there be a happy ending?

I have always been fascinated by this part of our United States history and Hart completely captures the uncertainty of this time. She also shares an aspect that I wasn't as familiar with. Spies were very much a part of this conflict and her author's notes tell us that Washington City (Washington, DC) and Richmond were hotbeds for this activity. Hart offers a stirring account of John and Annie's dilemma, and she shows the disappointment and sorrow that plagued so many, along with the tremendous fear if you lived near the fighting! The Civil War was a terrible conflict that caused people to doubt the ones that they loved, and to keep secrets from the ones that they held dear. Avenue of Betrayal is a moving, action-packed story that ends with a cliffhanger, and the promise of more adventure and intrigue in this Spies of the Civil War series.

If you enjoy historical Christian fiction, you will want to read Avenue of Betrayal. You won't be disappointed!

I received a copy of this book from the author and publisher. There was absolutely no obligation for a favorable review. These are my own thoughts. 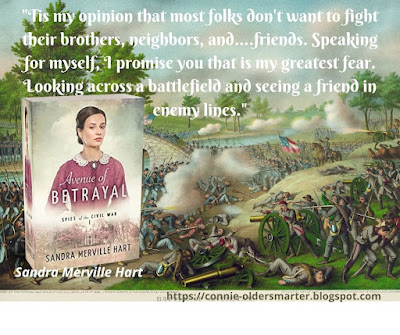 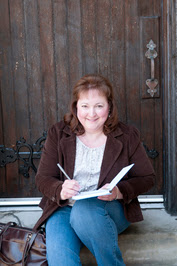 Award-Winning and Amazon Bestselling Author Sandra Merville Hart is thrilled that her next Civil War series “Spies of the Civil War” will release in 2022! Book 1 of the series, Avenue of Betrayal, is set in Washington DC in 1861. Boulevard of Confusion and Byway to Danger (Books 2 & 3) are set in Richmond, Virginia, in 1862. Actual historical spies will influence the lives of fictional characters in a series where everyone has secrets.
Sandra is on the Planning Committee for Faith & Fellowship Book Festival. She served in the past as Executive Editor for DevoKids.com where she also contributed many historical articles. She teaches writer workshops. She's a member of American Christian Fiction Writers and other writer groups.
Sandra Merville Hart loves to uncover little-known yet fascinating facts about our American history to include in her stories and drags her husband along on her adventures. Thankfully, he also enjoys these fact-finding missions.
Connect with Sandra on her blog, Historical Nibbles, where readers find posts relating to historical food/recipes, book reviews, and American history.
Learn more at       Facebook      Twitter

View all my reviews
Posted by Connie Porter Saunders at 4:30 PM